A new National Academy of Sciences/Institute of Medicine publication suggests that it’s time for practices and policies regarding the early care and education of young children to catch up with the science of early brain development.  The Academy’s call is urgent and the publication seeks to transform the workforce. It includes a recommendation that all lead teachers working with children from birth through age eight have a Bachelor’s degree.  (Transforming the Workforce for Children Birth through Age 8:  A Unifying Foundation)

If you’re thinking that would be quite a stretch, you’re right… but perhaps not by as much as you think.  According to a 2013 brief entitled “Number and Characteristics of Early Care and Education Teachers and Caregivers: Initial Findings from the National Survey of Early Care and Education,” more than half (53%) of child care center classroom teachers and caregivers had some level of college experience, with one-quarter (26%) having a four-year degree, a significant increase over the previous survey (2009-2010). 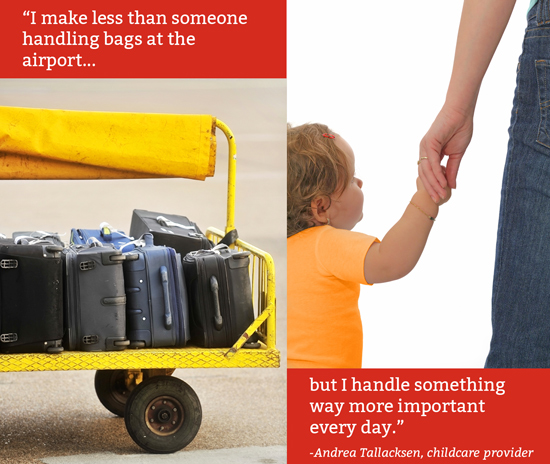 The problem.  There is a major disconnect between educational attainment and compensation of the early childhood education workforce.  Unlike most professions, how much one earns in the early childhood field depends very little on one’s education.  Instead, variations in earnings depend on the age of the children and the auspice under which one works: the older the child, the more you make; and if you’re part of the public education system you make more than in Head Start, where you make more than in a child care center. It is an irrational wage structure that leaves many dedicated professionals and millions of children short-changed.

The original National Child Care Staffing Study (1989) was the first to document the link between education of caregivers and quality of care.  This study also found that wages were a key predictor of quality because low wages fueled high turnover. Yet current public policy aimed at improving quality still fails to link advances in education with improved compensation for the early childhood workforce.

Despite an explosion of knowledge about the importance of the early years, the average wage of a childcare center-based teacher ($10.60 per hour nationally), is less than those who care for our animals or as noted by Wisconsin childcare teacher, Andrea Tallacksen, who holds a bachelor’s degree in elementary education, less than those handling our bags at the airport – a job with no educational requirements!  (According to Delta Airlines, baggage handlers earn on average $13/hour.  Payscale.com reports the average pay of baggage handlers at $12.08/hour).

What now? Transforming this workforce begins by re-opening the conversation of compensation parity with educators of older children, revisiting public policies that fiscally undervalue the work of early childhood education, and recruiting new partners in the struggle for economic justice.